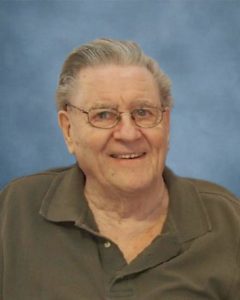 Tom passed away peacefully on June 23, 2018, just two weeks before his 90th birthday. Predeceased by his wife Lenore in 2015, he is survived by his children Steve (Jan), Rob (Carol), Joan, and Sue (Dean), grandchildren Geoff (Jen), Andrea (Colin), Tom, Lori, Aaron (Sanae), Christina, Rhys (Natalie), Josh (Aaryn), Ben (Lisa), Jesse, and David, and great grandchildren Ajay, Jasper, and Hannah. He was predeceased by his sister Mary (Tim), and is survived by his siblings Bob (Lois) and Margaret (Doug).
Tom grew up on a farm near Kakabeka Falls, Ontario. He graduated from the University of Toronto with a degree in Engineering in 1952, then moved west with Shell Oil to help lead the development of Alberta’s oil industry. He left Shell as head of exploration and production for Western Canada to found Chambers Engineering Ltd. He then embarked on a second career as MLA for Edmonton Calder and Minister of Public Works in the Peter Lougheed government from 1971-1986, overseeing the development of Kananaskis Country, Edmonton’s Capital City Park, and facilities for the 1988 Calgary Olympics.

In retirement, he continued his love of fishing, and took up new hobbies of downhill skiing, bicycling and golf. He had a great way with children and his grandchildren enjoyed their times with Grandpa.

Special thanks to Bernie Plesniewicz, RN, and her amazing staff at Touchmark Memory Care, and to his physicians Dr. Vern Chichak and Dr. Phil Leong-Sit for their wonderful and compassionate care.